Pacific Childhoods in the Rafu: Multiple Transnational Modernisms and the Los Angeles Nisei, 1918-1942 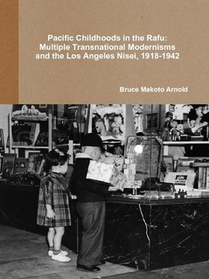 My PhD Dissertation written under the guidance of Charles J. Shindo during my matriculation at the Louisiana State University and Agricultural and Mechanical College (committee members: Gibril Cole and Zevi Gutfreund).

The second generation Japanese Americans (Nisei) who grew up in the Los Angeles area before the Second World War had two primary cultures seemingly competing for their attention: that of their parents (Issei) and that of the dominant culture surrounding them. However, the generation gap between the Issei and Nisei was extreme, with the former being raised right in the midst of the Second Industrial Revolution in Japan while the latter was raised in America during the Revolution’s consolidation into the modern that stressed science and intellect over tradition and organization over instinct. An examination of the lives of Nisei who were children and adolescents before the Second World War demonstrates that binary enculturation oversimplifies the transnational links between Japan, United States, and modernity, particularly true in the Greater Los Angeles region which was one of the most ethnically diverse, least dense, and proudly progressive regions in the United States between 1918 and 1942, the period in which most Nisei were in their childhood and adolescent phases.

Because of the accepting nature of the Southland, the children of the Issei could choose what activities to accept or deny not based on that activity’s ethnic origin, but on that activity’s utility and level of acceptableness to their parents and the larger society.  Issei were far from passive and well-understood the implications of their children’s choices. Before immigrating to the United States, both male and female Issei experienced Japan’s rapid strides toward modernity and were consistently aware of the state of Japan’s modernization. After Japanese immigration was cut off and after Issei were declared ineligible for citizenship, their Nisei children—American citizens thanks to their birth—were simply too valuable to a household’s future to raise passively. Also thanks to the region’s welcoming nature, Nisei children and adolescents in the Southland were insulated from harshly overt forms of racism and felt a great degree of flexibility in defining their choices on their own terms. Consequently, Nisei were accepted into the fabric of Southland culture before World War II in a way similar to most other immigrant children during this period.

Since some have asked, this dissertation is available for purchase in hardback and paperback.

At Atoll on the Edge of Hell: The U.S. Military's use of Ulithi During World War II

This was my thesis written at Sam Houston State University under the direction of Dr. James S. Olson.
Please read more about this here.

I am currently converting this thesis into a book if you would like to wait (assuming I can find a publisher).

Diplomacy Far Removed: A Reinterpretation of the U.S. Decision to Open Diplomatic Relations with Japan

My senior/honors thesis written under the supervision of Dr. Gail Lee Bernstein at the University of Arizona.

I'm not sure if I'll ever get back to it, but I've uploaded a copy here and, since a few people have asked, it is available in print here. I've left it in its original form, as to change it at this point (even corrections that are sorely needed) would make it differ from the approved and final version submitted to the department. If I do get back to it, I'll publish it under a different title, etc.

On the morning of April 28, 1849, the USS Preble, a sloop of war commanded by James Glynn, weighed anchor and sailed away from Nagasaki harbor. On board were fourteen men from the whaler Lagoda who had been held for over a year by Japanese authorities. Upon interrogation, the men stated that they were physically mistreated by the Japanese. Two years earlier, sailors from the whaler Lawrence, who were also forced onto Japanese shores and held captive reported similar mistreatment. The story of these events comprised over fifty pages of the original Senate report used to persuade the United States Congress to approve a naval expedition to Japan.

This study seeks to clarify the impact of the stories of the Lawrence and Lagoda  on the decision to send the U.S. mission to Japan (also known as the Pretty Mission or Perry Expedition). After examining the actual narratives of the sailors and comparing them with Japanese reports in order to ascertain a factual baseline, the study examines the reaction to the Lawrence and Lagoda by prominent businessmen, naval officers, and politicians. Then, the reaction to the Lawrence and Lagoda is placed in the contextual framework of prevailing mid-nineteenth century American social, cultural, and legal attitudes in order to show that humanitarian concerns were, indeed, a prime consideration for sending the Perry mission to Japan.