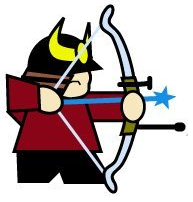 I shot competitive Olympic-style archery for several years, particularly while I was working on my first master's degree at the University of Tulsa (my family is of samurai caste, so it's only natural!). I shot well enough to become a Collegiate All American in 1998 and represented the U.S. at the Yamaha Cup in Japan (Justin Huish won the tournament that year; they invited me back in 1999). My home club at the time was the Tulsa Archery Association (which actually produced two All-Americans that year). I was also invited to both Olympic Training Centers (Colorado Springs and Chula Vista) and got to study under some of the best coaches in the world. I had some great sponsors such as Beiter, Precision Archery/Doinker, and X-Ring. I was also a level two-certified coach!

To the left was a logo custom-made for me by my most wonderful and talented cousin in Japan!

I used both a Sky Conquest and a Yamaha Super Feel Forged bow, both usually weighted between 40 and 42 lbs of pull at 28, but my draw length was around 33" at time time. Retired equipment in light gray. 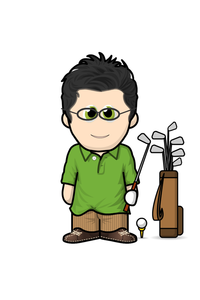 I like to play golf when I have the time (and funds). My handicap is about 300 or thereabouts... (yes, that's a cartoon custom-made for me!)

Those in my branch of the Arnold/Higuchi clan are big bowlers! I've rolled in many, many leagues. My high score is a 289.

I participated in all of these at one time or another.